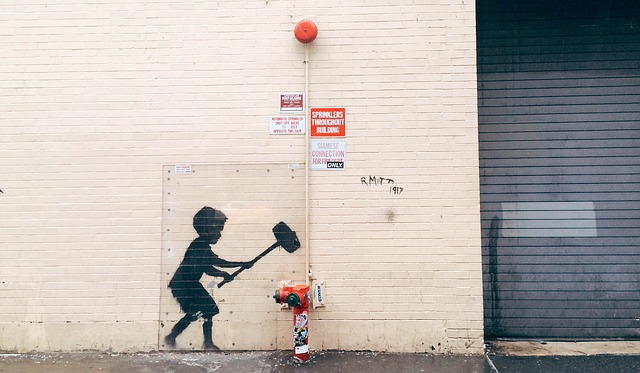 The following five people, I have selected because they have influenced and motivated me in my career as a designer/developer. Some the people you may recognize their name right away, others you may not, The list is is no particular order, by least favorite or most liked, I find each person interesting in their own way.

Banksy: is an England-based graffiti artist, political activist, film director and painter.  His art can be funny, political, social and distinctive. I particular enjoy his stencil like technique with his wall street art. The one thing that bothers me about Banksy is no one really know who he is, his identity is always hidden. I can understand this because of the some of art can be considered “vandalism” but it would be nice to put a face behind the name. But I guess the unknown makes him his character. Some my own personal design is inspired by Banksy. Unfortunately this style of design is to casual for the corporate world.

Hillman Curtis (RIP): One may all time favorite new media designers, author and filmmaker. Among his many jobs, David Hillman Curtis owned a digital design and film production in NYC.  He has designed sites for such major corporations such as Adobe and Yahoo. I would recommend reading two of his more popular books: “Hillman Curtis on Creating Short Films for the Web” and “MTIV: Inspiration and Practice for the New Media Designer.”

Quentin Tarantino: My first Tarantino film was “Pulp Fiction,” once I saw this film, I was hooked. As I finished watching the film I said to myself I want to see/own every film that is directed by this creative genius. From there on out I had to see and own every Tarantino film every made or sponsored by him.

Steve Jobs: You gave us Apple! Thank you.

Billie Joe Armstrong (Green Day): is an American rock musician for punk rock band Green Day. What some folks don’t know is that he has/will play under other less famous band names such as Pinhead Gunpowder and Foxboro Hot Tubs. I enjoy listening to his music while designing / developing and enjoy his sense of humor and overall style.

One thought on “5 People that Motivate Design”